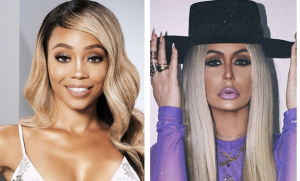 A new reality show is coming to BET is this summer. Premiering June 9, BET Presents The Encore will follow women battling it out to be a part of the next big R&B group. Similar to Making The Band, singers will live together for 30 days to record an album at a home studio, learn choreography and practice vocals.

A plus for the women competing, they’ll be joined by eight former members from groups who had success in the early 90’s and 2000’s; as well as Grammy-nominated R&B singer Nivea.

In an interview with Associated Press, executive producer of the show, Carlos King, it was important to pay homage to women in the R&B industry.

“I felt that girl groups never got its just do … and I, as a content creator, wanted to … educate the masses on who I feel are the forgotten sisters of music,” said King.

AP reports, the new reality series has an impressive list of iconic R&B women joining the show. Among the cast are Pamela Long of Total, the Bad Boy Records trio, sisters Irish and LeMisha Grinstead from 702, Shamari DeVoe of Blaque, and Aubrey O’Day of Danity Kane. Other members set to star in the series are Kiely Williams, who was first in the trio 3LW, Nivea, and twins Felisha and Fallon King of Cherish.

“Fueled with passion and drive, the leading ladies of ‘BET Presents The Encore’ prove that lightning can absolutely strike twice, and we can’t wait to share the next phase of their journey with our viewers,” Tiffany Lea Williams, BET’s executive vice president of unscripted programming and development, said in a statement to the AP.

The post New Reality Series Following Women Competing To Be In The Next Big R&B Group Coming To BET appeared first on The Source.