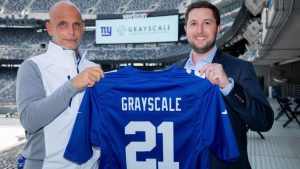 The NFL scored its first-ever cryptocurrency partner, and the New York Giants made it happen.

“Our partnership with the Giants is incredibly meaningful because our roots are in New York,” said Grayscale CEO, Michael Sonnenshein. “We’re excited to partner with such a forward-thinking franchise, to work together on philanthropic initiatives, and to continue to support the New York metropolitan community.”

Grayscale is one of the world’s largest digital currency asset managers, with more than $46.65 billion in assets under management as of April 30, 2021.

While this is the first deal of its kind for an NFL team, moves in the cryptocurrency space are becoming more common with the league’s players.

As the evolution of crypto currency grows, so will the demand for it. The NFL is simply getting ready for it.