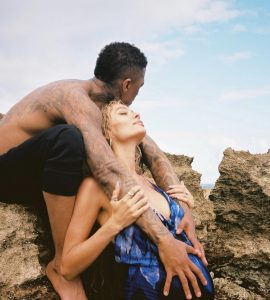 Nick Cannon is a proud papa and he’s adding more to the list. Welcome baby number 7, a baby boy with Alyssa Scott.

Three weeks ago there were rumors of potential 7th child on the way. When model and Wild ‘N Out girl, Alyssa Scott, posted and deleted a maternity photo, with the caption, “Zen S. Cannon.” Cannon never confirmed the validity of her IG announcement.

The Masked Singer host has been vocal about his desire to expand his family over the past few years. Cannon is known for his Instagram maternity photo announcements and Father’s Day was no different. Alyssa Scott seems to confirm the rumor mill that she is carrying Nick Cannon’s seventh baby by showing us.

On Father’s Day, Scott shared on her Instagram Story a maternity photo of Cannon with both hands on her baby bump. She captioned the picture, “Celebrating you today.”

This comes a few days after the former Nickelodeon star just welcomed his twin boys with 29 year old Abby De La Rosa on Monday, 6 months after welcoming his daughter with Brittany Bell. From the picture it looks like model Alyssa Scott is due any day now. Congratulations are in order to Nick Cannon and Alyssa Scott.