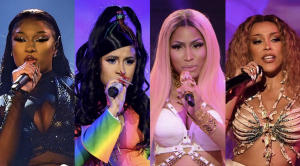 It’s only June 9, and it’s already been a great month for music. Recently the fellas have been dropping new projects, but don’t get it twisted; The ladies have something to say too! This Friday we can expect new music from Nicki Minaj, Megan Thee Stallion, Doja Cat, Cardi B, and Dream Doll.

Last month, Nicki Minaj had everybody ready to rock a Barbie chain and cut bangs into our hair after she released her classic mixtape Beam Me Up Scotty on streaming platforms. Now, she’s back with a new single on Polo G’s Hall Of Fame project. Scheduled to drop this Friday, For The Love of New York is one of 20 songs on the Chicago rapper’s upcoming album. Other features on the LP are Kid Laroi, Lil Durk, Lil Wayne, Scorey, G Herbo, Rod Wave, Da Baby, Young Thug, Roddy Rich, Pop Smoke, and Fivio Foreign. After releasing the official tracklist for the project, Polo G tweeted his appreciation for Nicki, to which she replied

“Thank you, boo. My fans gon fall in love with you when they hear #ForTheLoveOfNewYork I can promise you that. All-Star line-up on the album. You puttin on for NewYork.”

After a six-week hiatus, Megan Thee Stallion announced that she’s refreshed and making a return this week. This Friday the self-proclaimed Hot Girl is dropping Thot Shit.

Not only is she dropping music, but she wants us to address her as Ms. Snow. If you’re an OG Megan fan, then you know this is one of her alter egos and a nod to her 2018 album Tina Snow. We’re hoping this means even more music from the Houston rapper.. maybe an album?

Doja Cat has been killing the game with her unique style, iconic performances, and playful charm. After trolling fans her latest “single” Very Best on SoundCloud, she’s back with a new single. The rapper tweeted Need To Know will be available on June 11.

Need To Know isn’t the only single we’ll be getting from the rapper. According to Doja Cat, she has more music on the way.

“Need to know isn’t even the next single is just some shit before the next more important single comes out for you to enjoy.” wrote Doja Cat.

It’s been a successful year for Cardi B. Aside from winning multiple awards and hit songs, the rapper has been featured on songs with some of the best in the game. Now, Hip Hop’s “Binderella” is back with new music this Friday. This time she’ll be joining her husband Offset and the rest of the Migos on their upcoming album Culture III.

Type Shit is one of 19 songs on the rap groups project. Other artists featured on the LP are Drake, Polo G, Future, Justin Bieber, Juice Wrld, Pop Smoke and YungBoy.

We may have first met rapper Dream Doll on reality television, but she’s proving that she’s more than just a pretty face with a big personality. Since breaking into the music scene, the Bronx Rapper has created her own lane and is showing everyone she’s not going anywhere. Nearly two months after releasing her freestyle Collection over Jigga and Foxy Brown’s classic Ain’t No Nigg*, she’s back with a new single. Early Wednesday morning, the rapper announced she’ll be releasing TRYOUTS this week.