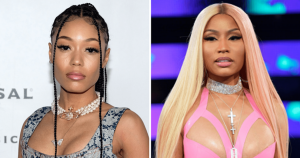 Coi Leray had a performance in Houston over the weekend and the crowd’s reaction is now viral.

The “Big Purr” artist took to Twitter to speak candidly about the moment.

“The love use to outweigh the hate but now the hate outweigh the love and it’s slowing destroying me,” she wrote. “Y’all haters are in my life for a reason, we gon have to just deal with eachother. In with whatever smoke.”

Following a series of tweets, she received some words of encouragement from Nicki Minaj. “Don’t do that. Chin up. Always remember this, when black ppl not fkn w|you #TheyWillBoo,” Minaj wrote. “Those ppl were on their feet. That means they may not have known the song, but they were interested in getting to know more— so they were observing u. Charge it to the game & move on.”

Nicki’s words were clearly uplifting because Coi admitted that her kind words turned the last few days from “wtf to best weekend ever.”

“Thank you so much for this. This means everything and more to me,” she wrote in response to Nicki’s tweet. “Wow. I’m speechless. You just gave me so much more hope. Thank you again.”

Polo G also sent love to Coi Leray. “That’s always how it b when u 1st come in Compared to when u really blow u gotta block that shit out & keep goin crazy u got it,” Polo G wrote.