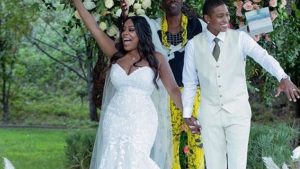 In a teaser, the actress explained how she found love with Betts after two marriages with men. Nash said she “never been with a woman before,” prior to her wife.

The Claws star also revealed her children’s reactions. “My daughters were like, ‘Wait what?’ My youngest daughter, she reminded me, she was like, ‘Wait a minute mom, are you the same mom that was like girl, I’m strictly d***ly?’ And I was like, ‘Wah, wah. Like yeah, but no.’ “

The couple tied the knot in a surprise ceremony in August 2020. Shortly after, Niecy addressed remarks about her “coming out.”

“I was not suppressing my sexuality my whole life. I love who I love. At one point in my life, I married twice and I love those people. And today I love this person. I’ve done everything I wanted to do on my own terms and my own way. So my choice now in a partner has nothing to do with who I’ve always been. It’s a matter of who I am in this moment.”

The post Niecy Nash Says She’s ‘Never Been With A Woman’ Before Marrying Her Wife, Jessica Betts appeared first on The Source.