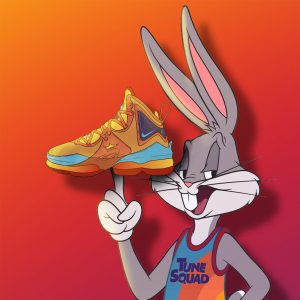 You heard it from LeBron James at the close of this year’s playoff run. He is getting ready to play the Goon Squad. With Space Jam: A New Legacy on the horizon, Nike has revealed the gear that King James will take on his next opponent in.

Producer of the film Maverick Carter is hoping that the audience receives a sense of joy from the film and the stamp that Nike and Converse enter into the film, by way of their commemorative footwear and apparel collections. The collections are inspired by sport: a sense of fun is integral in finding your potential, because potential is all about possibility.

“The biggest moment in the movie for our characters is the final game,” says Carter. “It culminates into this epic showdown with real consequences for everyone playing. The game matters. So when a kid sees the characters wearing Nike gear, their imagination makes the connection that Nike gives you the tools to uncover the best version of yourself.”

The new footwear collection brings the Looney Tunes to a new generation of fans bringing in colorways and graphic elements that will highlight different characters.

On court action will receive a three-style series of the LeBron 18 Low in adult and kids sizes uses a split color design to call out some of the most memorable faceoffs in the franchise’s history, including Bugs vs. Marvin the Martian, Tweety Bird vs. Sylvester, and Road Runner vs. Wile. E. Coyote. Toddler sizes include versions of the Air Force 1, featuring a host of characters and a Bugs LeBron 18.

A New Legacy will also introduce the LeBron 19, a sneaker equipped with a double-chambered Air Max unit in the heel and a Zoom Air forefoot unit.

According to Nike Basketball footwear designer Jason Petrie, the new platform was inspired by the futuristic magic behind the movie.

“In designing the LeBron 19, we were definitely guided by what was happening in the film,” says Petrie. “We wanted to give LeBron a brand-new feeling that was synonymous with an otherworldly, space-age kind of look.”

The new uniforms are dual-branded by Nike and LeBron and are Dri-FIT, created from a shiny Durasheen fabric. The Tune Squad varsity jacket incorporates the same premium letter stitching across the chest, while a vibrant, all-over orange print lines the inside. Rounding out the Converse apparel is a roster of Looney Tunes characters assembled on a collection of graphic T-shirts, shorts, and hoodies.