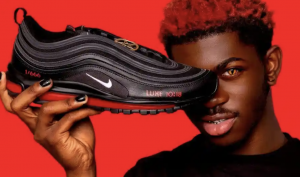 Lil Nas X had people in a frenzy with the release of his newest song, “MONTERO.” In addition to facing some backlash for the satanic imagery in the music video, others found issues with the music artist’s “Satan Shoes” collaboration with MSCHF.

666 pairs of the remixed Airmax 97 were made, all of which feature a pentagram shoelace decal, a pentagram design in the insole, a drop of blood and oil in the air bubble midsole, and “Luke 10:18” on the toebox. The shoes were sold for $1,018 each and sold out rather quickly. Just a couple of days after the release of the shoes, Nike issued a lawsuit against MSCHF claiming that people would think the shoe is an official collaboration between the two companies.

On Thursday, April 8, the lawsuit was settled. As a part of the settlement, Nike asked MSCHF to issue a voluntary recall of the shoe, offering people who bought and recieved pairs a full refund for returning their shoes. This also applied to MSCHF’s “Jesus Shoe” which released in 2019 and featured water from the Jordan river in the midsole.