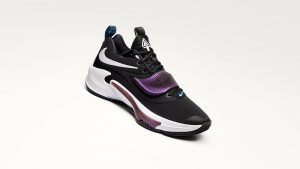 The third edition of Giannis Antetokounmpo’s signature line has been revealed. The Zoom Freak 3 is created in effort to build space in radical downhill angles. The shoe also supports the phyiscality that define the former league MVP’s style of play.

“One of the hallmarks of his athleticism is transferring energy quickly from leg to leg to maneuver his body through gaps,” says Ross Klein, Sr. Creative Director for Men’s Performance Footwear at Nike. “Giannis works his foot like a gas and brake. He also works all different angles of his foot as he’s driving to the basket, so we wanted to contour the design to fit the way he transitions from step to step.”

The sneaker is equipped with two Zoom Air units under the ball of the foot to absorb energy and provide responsiveness. The set-up is low to the ground, which means the foot is in closer contact with the floor, leading to tight control for searing downhill attacks. The engineered upper helps keep Antetokounmpo’s foot contained, while the strap helps lock down the forefoot, making sure his center of gravity won’t slide over the footbed.

The sneaker will debut in a black and purple Project 34 colorway and the orange Freak colorway will release globally on July 1 with a North America launch date set for August.