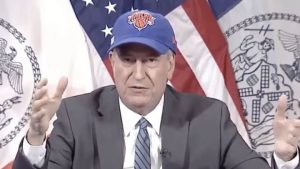 The Atlanta Hawks got a game 1 win over the New York Knicks and Trae Young made sure he screamed at the fans after hitting a game-winner.

“This is about basketball, I have an important official announcement, this is very important I want to get this out. Message to Trae Young, on behalf of the people of New York City and anyone that cares about playing basketball the right way,” de Blasio said. “Stop hunting for fouls Trae. I want to quote Steve Nash, great player, great coach, he says ‘that’s not basketball’. Trae, Trae, that hawk’s not going to fly in New York City. C’mon. Play the game the right way, see if you can win. I think the Knicks are going to teach you a lesson.