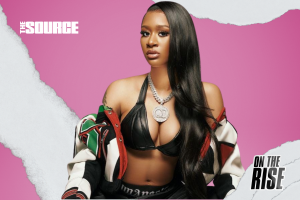 From poetry slammer to viral sensation, Milwaukee rapper Lakeyah has traveled a unique road that would eventually lead the Milwaukee representative to a coveted deal with Atlanta’s Quality Control imprint.

Since then, the budding emcee and singer has graced tracks alongside the likes of Lil Baby, 42 Dugg and The City Girls, laced with plenty of room to prove her worth among the industry’s forerunners. All roads have brought us to the arrival of her In Due Time full-length project. On it, Lakeyah rides solo for for most of the effort, leaving strategic room for voices like Gucci Mane and Yung Bleu as her sole collaborators.

The remainder of the tracklist, however, is an exercise in paid dues as Lakeyah strides in confidence, reminding fans of the root of their allegiance and introducing unfamiliar ears to a gifted new pen within the rap game.

Ahead of its arrival, Lakeyah spoke with The Source about her origins, her keys to positive thinking, and the lessons she’s learned throughout her journey in the industry.

This interview has been edited for brevity and clarity.

So, how did you get started in music ?

I was about 15 when I posted freestyle sounds like “15” and “20 NASA Response” on Instagram and Facebook. I was also on a poetry slam team and they told me that I sound like a rapper. This was also around the time that the “So Gone” challenge was out. I did that and that was my first viral moment. After that, I kept dropping freestyles.

What is Milwaukee like? There hasn’t been a rapper from Milwaukee.

The Milwaukee music scene is kind of dead. A lot of people say we sound like Detroit or the Bay Area, but nobody knows Milwaukee artists. So, I had to get out of there. It’s a small city. All there is to do is go to the lake or the mall, but I wouldn’t trade it for anything.

Do you have any musically influences?
I grew up on Nicki Minaj, but I do R&B stuff too. I love Tink and Dreezy, but one of my biggest inspirations is Tee Grizzley. His whole aura is me as a guy.
And J. Cole. I played “Crooked Smile” all that time as a kid

If you had to describe your music in 3 words what would it be?

Energetic, bossy, and my R&B side is emotional. I’m a Pisces, so I be going through it sometimes.

How was it working with City Girls?

Well, first I feel like their little sister. I loved them before I even got signed to QC. So, when they got on the song, I knew it was gonna be the one. I didn’t know they was gonna ride the song the way they did, but they were the perfect feature for that.

Let’s say you’re putting together a perfect album, who are some people you want to work with?

Tee Grizzley, Drake, and Nicki Minaj because every girl wants to work with Nicki. One more would be Summer Walker. But, I don’t want any features on my perfect album.

Honestly, all the love from different female artists. They always reach out saying they want to work with me. Also, my fans keep me above water.
It could be 100 people saying, ‘she wack,’ but my fans will have my back and say, ‘I don’t know what you hearing, but she’s fire.’

Lastly, P really believes in me so much. Even when I don’t believe in myself. Everyone needs a person like that.

What’s been your most significant moment so far?

The post On The Rise: Get Acquainted With Quality Control’s Lakeyah appeared first on The Source.