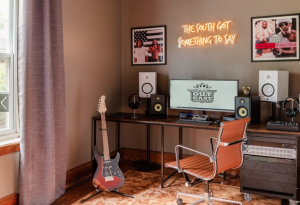 According to a report from TMZ, Big Boi from the legendary duo Outkast has decided to list “The Dungeon” on AirBNB, where he and Andre 3000 created some of Outkast’s most classic hits in the Atlanta suburb.

Big Boi has offered up three overnight stays in the posh digs in June and July in celebration of the anniversary of their sophomore LP, 1996’s ATLiens. The booking goes live on the home sharing site on June 25 at 1PM EST. Those who are lucky enough to book a reservation who live in the Atlanta area will also receive free transportation to and from the spot in a Cadillac Escalade.

In honor of the 25th anniversary of ATLiens, what price did Big Boi come up with for the booking? $25, of course.

Big Boi purchased the home two years ago and had joined with AirBNB for the quarter century celebration. AirBNB is also making a donation from the proceeds will go to the Atlanta Public Schools Music Department to expand resources and increase access to music education for K-12 students.

The post Outkast’s Big Boi Lists “The Dungeon” On AirBNB For ‘ATLiens’ Album’s 25th Anniversary appeared first on The Source.