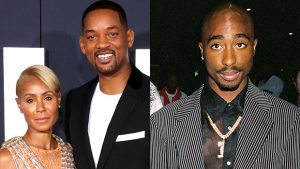 Jada Pinkett Smith and Tupac Shakur’s close relationship from childhood to adulthood has been well-documented. But there was a moment when things got rocky when she began dating Will Smith who she eventually married and had two children with.

Outlawz rapper Napoleon appeared on The Art of Dialogue and shared a story about the time when Jada offended the late rapper.

“I remember when I first came around ’Pac, Jada Pinkett was in a movie—might have been the first movie she ever starred in, with the Wayans brothers,” Napoleon began.

“Then a couple days later, I heard him mentioning to someone that he knew the actress, which is Jada Pinkett,” the rapper continued. “Later on, she became a star. The second time I probably heard him talk about her is when he went to L.A. He was very upset. ’Pac came in the room and was like, ‘Jada, she gon’ contact me and tell me don’t do nothing to Will Smith.’ So ’Pac was upset and said, ‘I don’t know why she think I would have tried to make some problems with Will Smith.’ I guess it kind of hurt him… He had a lot of love for Jada Pinkett, a lot of respect for her.”

Back in January 2020, Will Smith admitted that he was jealous of his wife’s relationship with Tupac and never spoke to the West Coast rapper because of that.

“Oh my God!” Will said. “Dude! And that was in the early days. And it was like, that was a big regret for me too, ’cause I could never open up to interact with ’Pac. You know, we had a little bit of a thing because they grew up with each other.”

He added, “They loved each other, but they never had a sexual relationship. But they had come into that age where that was a possibility and then Jada was with me. So, ’Pac had a little thing on that. But she just loved him. He was the image of perfection, but she was with the Fresh Prince. We were in the room together a couple times, I couldn’t speak to him. And he wasn’t gon’ speak to me if I wasn’t going to speak to him.”

Do you think the claims Napoleon is making about Jada, Tupac, and Will are true?

The post Outlawz Rapper Claims Jada Pinkett Smith Asked Tupac Not To Hurt Will Smith When She Began Dating Him appeared first on The Source.