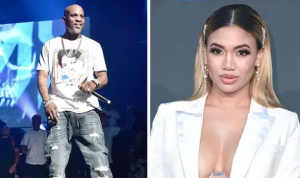 Paige Hurd has been MIA on social media since the passing of DMX.

Although she is not his biological daughter she became his goddaughter after playing his on-screen daughter in Cradle 2 the Grave, as she explained at his funeral.

The actress took to Instagram over the weekend to Penn a heartfelt tribute to the late hip-hop icon. Paige Posted a picture of them a week before he was hospitalized after suffering from a heart attack that was triggered by a drug overdose.

“the last time I would ever hear you scream PUMPKINNN. when we are together we are inseparable, & we DO NOT play about each-other,” she said before apologizing for her silence.

“I just can’t believe this was our goodbye. Shock has been my feeling the past month since I got the worst call in the middle of the night. The shock & grief is heavy, uncomfortable, and hard to express. I just don’t have much yet, forgive my silence,” she said. “I love you so much. I’m so proud to be your goddaughter. You are apart of my world and my heart aches terribly these days and will never stop.”

Have you ever watched Paige Hurd and DMX in Cradle 2 the Grave? Check out this clip from the movie below:

The post Paige Hurd Pens Heartfelt Tribute To Her Godfather DMX appeared first on The Source.