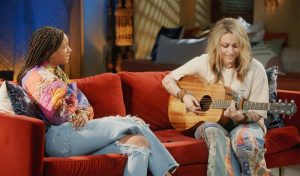 Paris Jackson stopped by the Red Table Talk for an intimate conversation about her upbringing. In the upcoming episode, Jackson, Michael Jackson’s middle-child, shared the details of how her father’s fame affected her. Wednesday’s edition of the online talk show that airs on Facebook Watch at 9 a.m. PDT/noon EDT.

While the young woman was shielded from the world as a child, she still felt the impact of constant public scrutiny. During her discussion with the mother-daughter trio, she shared the long-term anxiety and trauma she experienced from enduring countless camera clicks by paparazzi since she was a child. In the episode she said

“I experience auditory hallucinations sometimes with camera clicks and severe paranoia and have been going to therapy for a lot of things but that included,” Jackson says. “I’ll hear a trash bag rustling and flinch in panic.” She adds: “I think it’s standard PTSD.”

The full episode will be availble Wednesday, June 16.

The post Paris Jackson Explores Her Upbringing On Red Table Talk appeared first on The Source.