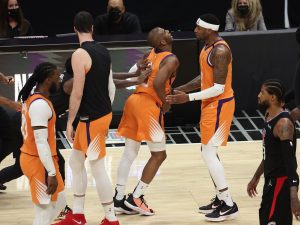 During the Clippers’ 130-103 Game 6 loss that ended their season, Patrick Beverly lost his cool and shoved Chris Paul to the floor. The moment led to an ejection.

“@CP3 emotions got the best of me last night gang,” Beverley wrote. “My bad wasn’t meant for you. Congrats on making it to the Finals. Best of Luck.”

There has yet to be a public response from Paul, but likely because they are scouting their NBA Finals opponent. You can see the moment and apology below.