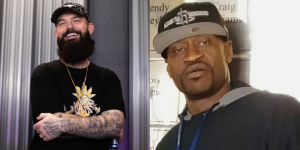 Paul Wall reveals that he actually had the pleasure of meeting George Floyd in their hometown of Houston when Floyd used to rap with DJ Screw’s legendary Screwed Up Click.

The “Sittin Sidewayz” rapper appeared on Two Bees Tv in October 2020 and spoke about his experience protesting.  “It was a combination of a lot of energy. But I think the main energy is fed up. People are fed up with being lied to. Fed up with being mistreated and put aside.”

Floyd was one of the focal points of the ongoing nationwide protests, including Ahmaud Arbery and Breonna Taylor, but it turns out that Wall actually knew Big Floyd.

“I did have the privilege and the blessing to meet him on a few different occasions. Always a good dude, big dude. You know, him being from the screwed up clique… anybody period who came out of the screwed up clique, we hold them to a higher level of love and admiration,” he responded.

In light of the George Floyd situation, Paul Wall is forced to have uncomfortable conversations with his biracial daughter and son.

“With my kids, I try to be open and honest about it. Especially Being that my son is 14 and he’s my size. so if out and about he’s not looking like a kid, he’s looking a grown man. And he been looking like that. And I have to think about that when I think about Tamir Rice and these other young men that were killed.”

Check out the full interview below:

The post Paul Wall Recalls Meeting George Floyd in Houston During Screwed Up Click Days appeared first on The Source.