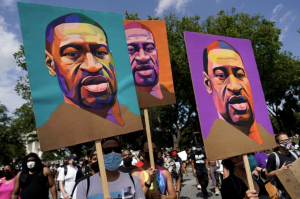 On May 25, 2020, George Floyd, an unarmed black man was murdered by Minneapolis police. This senseless act of violence was captured in a nearly 9-minute video by 17-year-old Darnella Frazier. The high school senior, caught the moment former white Minneapolis police officer Derek Chauvin knelt on Floyd’s neck; which sparked global outrage. Now, people are reflecting on the 46-year-olds untimely passing.

What People Are Saying

Combing through Twitter, you will find many users paying respects to George Floyd. One man shared a nice picture of Floyd with a thoughtful message.

Not only are people remembering Floyd; they’re also paying respects to his family. Floyd left behind his mother, daughter, daughter’s mother, two brothers, sister and other loved ones.

“Sending so much love & strength to #GeorgeFloyd’s family and loved ones today. 1-year later, there is still so much work to do. It’s forever work, truly. While he was the catalyst for so much change, he was also just a man of flesh & bones with a full life. Rest in Power.” wrote Cubby Pau.

While some people paid their respects on social media, others did it in person. A photo captured by Karem Yucel/ AFP, shows people kneeling and praying at George Floyd Memorial Square in Minneapolis.

“I’m at George Floyd Square this afternoon, which feels more celebratory than I’ve ever felt it.” said Jackson.

Other people reflecting on social media, are having conversations about the lessons they’ve learned this past year. One white woman spoke about silencing herself and listening to people of color.

“Since May 25, I learned how little I knew about systemic racism embedded in this nation, so I tried to silence myself and listen to non-white people around me. What have you learned since May 25? What have you done to advocate for racial justice?” wrote Sarah Kreig.

In addition to remebering George Floyd, people are speaking about what they feel is a lack of movement from the American Justice System.

“On this anniversary of George Floyd’s tragic passing, let’s not forget that despite all the protesting that happened last year the American criminal justice system has yet to be reformed. Don’t give up. Keep pushing.” wrote Stacia.

The post People Nationwide Reflect On The One Year Anniversary Of George Floyd’s Death appeared first on The Source.