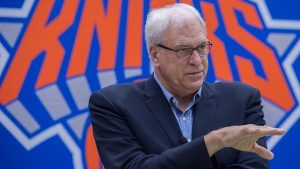 Jackson cited various factors that went against him, including the media, fans, and star player Carmelo Anthony.

Jackson told Karl that he believes he was fighting an uphill battle because the media has it out for the Knicks. According to Jackson, they were looking for any reason to make himself and the Knicks brand look wack. Jackson made it out to sound like he knew exactly what Trump was going through during his presidency.

“I kind of understand what Trump had to live with probably for his first 3.5 years in office with the media,” Jackson said, via the New York Daily News.

Jackson and Trump believes that the media might be the boogieman. Even if the media was out to get them, both their resent track record showed that neither was great at their respective jobs at the end.

The post Phill Jackson Believes The Media Was Unfair To Him and Donald Trump appeared first on The Source.