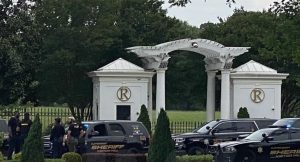 The gates of Rick Ross’ Georgia estate were the scene of the end of a wild police chase. TMZ states Clayton County Sheriffs started a car chase with a driver on Tuesday after the report of a man with a gun.

The estate of The Biggest Boss covers 235 acres in Georgia, which sits the rappers 45,000-square-foot-home. The home was most recently used to film Coming 2 America.

The post Police Chase Man with Gun to Gates of Rick Ross’ Estate appeared first on The Source.