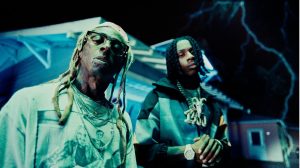 Polo G is on a hell of a run. After taking over the Billboard charts with one of the biggest releases of the year in “Rap Star,” the Chicago product is back with a new release, “GANG GANG,” featuring Lil Wayne.

The new single is produced by Angelo Ferraro and comes equipped with a Roscoe directed video. The single will appear on Polo G’s new Hall Of Fame project.