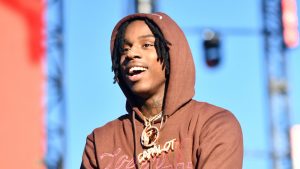 Coi Leray is receiving support from several rappers following a viral video showing a stoic crowd to her recent performance. Despite the crowd reaction, the New Jersey native continues to have a breakout year. Her Lil Durk assisted hit single, “No More Parties,” is certified platinum. It also peaked at 26 on Billboard’s Hot 100 charts.

Coi Leray hopped on stage to perform in front of an arena in Houston, TX. Apparently, the crowd did not know the song that Coi was performing at the time.

Following the video’s circulation, the 24 year-old artist took to Twitter.

She then received a tweet of support from the legendary, Nicki Minaj, who told Coi to keep her head high and “charge it to the game.” Nicki has seen it all as a woman emcee.

In addition to Nicki, Polo G, Rubi Rose and Asian Doll hopped in to support Coi.

However the Houston crowd did vibe to her hit single, “No More Parties.” All in all, Coi decided to take the advice and support of her fellow rap peers.