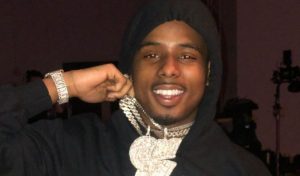 Pooh Shiesty became a trending topic over the weekend when fans quickly learned that he is really about that life.

The 21-year-old rapper appeared in King of Diamonds in Miami and someone claimed that he was robbed for $40,000.

In a now-viral clip, you can see the “Back In Blood” rapper checking his pockets meanwhile a nearby fan shouts, “They hit him for his money, they jacked Pooh Shiesty. They took his money!”

After the video made its rounds on the Internet, the Memphis rapper hopped online to put an end to all that wolfin’ on the net.

“False allegations nothing never been took from me,” Shiesty wrote on his Instagram Stories.

This incident comes a week after Pooh delivered the deluxe version of his debut musical effort, Shiesty Season.

The extended version includes appearances by G Herbo and Lil Baby. did you get a chance to listen to the new music?

The post Pooh Shiesty Clarifies Reports That $40K Was Stolen From Him in KOD appeared first on The Source.