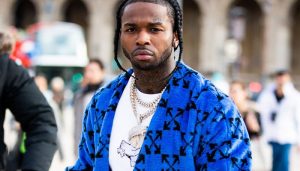 You can Pre-order Pop Smoke now.

Last week, the team of the late Pop Smoke unveiled that his second posthumous album Pop Smoke, which will include 17 tracks, is set to release on July 16. The anticipation for the project has increased as the pre-order went live on Apple Music and iTunes.

Along with last week’s unveiling of the album title and date, the team also released a 30 trailer and outro for the album.

Pop Smoke’s Shoot For The Stars Aim For The Moon debut album dropped five months after his unexpected tragic death in July 2020. Since its release, the posthumous album has spent the second-most weeks in the Billboard 200’s Top 10 of any Hip Hop album ever.

Pop Smoke was murdered during an armed home invasion in a rented Hollywood Hills mansion on February 19, 2020. Four arrests in the case have been made and one suspect remains at large. A preliminary trial hearing revealed a 15-year-old pulled the trigger multiple times and robbed Pop of his Rolex watch.