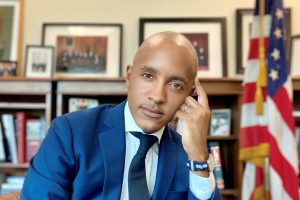 President Joe Biden is nominating veteran federal prosecutor Damian Williams to be U.S. attorney for Manhattan. Williams would become the first Black person to lead the nation’s highest-profile outpost of the Justice Department.

The recommendation will come from Senate Majority Leader Charles Schumer, which is in alignment with the process of U.S. attorneys being selected by senators of their states. Following the recommendation, Williams will then be required to be formally nominated by the White House.

According to Bloomberg, the preference to fill this position was a woman or a person of color, along with someone with a lengthy history in prosecuting financial-fraud cases.

“I am confident all three of these legal leaders will pursue the facts and justice without fear or favor and will greatly help rebuild public confidence in an unbiased and professional Department of Justice,” Schumer said in a prepared statement. “I am particularly proud to recommend the first African American to lead what many consider the most consequential prosecutorial office in America, the Southern District.”