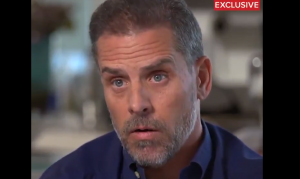 CBS aired their interview with Hunter Biden on “CBD Sunday Morning” yesterday. He shared and was very open about his drug addiction to crack cocaine.  During the interview shared above, he expressed, “I spent more time on my hands and knees picking through rugs, smoking anything that even remotely resembled crack cocaine. I probably smoked more parmesan cheese than anyone.” Hunter added, “I went one time for 13 days without sleeping and smoking crack and drinking vodka throughout that entire time.”

He shared his story and the circumstances that led him down him down the dark path with crack cocaine. He became emotional when discussing his father, President Joe Biden and how his father was there for him, even during his most difficult moments.

His brother Beau Biden died in 2015. Hunter Biden shared that when grieving his brother’s death, he began binge-drinking vodka. At that time, his dad was the vice-president of The United States and intervened. “He came to my apartment one time. And this was when he was still in office as vice president, and so he kinda ditched his Secret Service, figured out a way to get over to the house. And I said, ‘What are you doin’ here?’ He said, ‘Honey, what are you doing?’ I said, ‘Dad, I’m fine.’ He said, ‘You’re not fine.’

The post President Joe Biden’s Son Opens up about His Addiction to Crack appeared first on The Source.