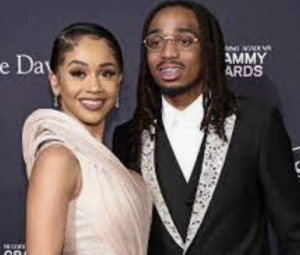 Quavo and Saweetie’s breakup has been ugly, to say the least. Just three weeks ago the self-proclaimed “Icy Girl” announced the couple’s breakup on Twitter, which led to passive aggressive tweet exchanges between the two, ending in Saweetie telling Quavo to “Take care”. The former couples interactions had social media in a frenzy, leading to memes and speculations of their former relationship.

Shortly after, rumors spread that Quavo reportedly repossessed the Bentley he gifted Saweetie late last year. Although the rumors were denied, Quavo’s newest rap verse has people thinking there might be truth to those speculations.

“Lil’ bitty b*tch, she slimy, she sneaky/I’m takin’ back that Bentley” Quavo rapped in the previewed track.

It is unclear where the verse came from, but the caption under the post read “Skrtttt Skrtt takin back dat Bently!! F*ck dem hoes now I gotta act stingy [laughing emoji] new Huncho & Petro otw”.

While it isn’t confirmed that the rapper is talking about Saweetie in this songs, it is not the first time fans speculated that Quavo dissed Saweetie. In a snippet released late last month, Quavo rapped “Young n***a burnt out, burnt out/12 pulling up so we burned out/Sweet little b***h now she turnt out.”

Let us know what you think in the comments. Do you think Quavo is taking shots at Saweetie amid their breakup?

The post Quavo Claims He Repossessed Saweetie’s Bentley In New Verse appeared first on The Source.