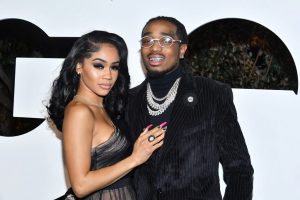 Footage was leaked of an elevator altercation with Saweetie and ex-boyfriend Quavo, where Saweetie was swung on Quavo while outside of an elevator until the fight went inside the elevator. Quavo dodged Saweetie’s throws over an orange Call of Duty case. Quavo was then seen on surveillance shoving his ex to the floor and taking control over the case as Saweetie stayed on the ground. Quavo stared down at her a few times before Saweetie eventually got up and limped off.

Quavo issued a statement to TMZ about the incident that occurred about a year ago, “We had an unfortunate situation almost a year ago that we both learned and moved on from. I haven’t physically abused Saweetie and have real gratitude for what we did share overall.” The Los Angeles Police Department is investigating the video and the issue.

The post Quavo Pushed Saweetie During Their Recent Relationship appeared first on The Source.