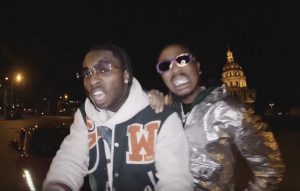 Pop Smoke posthumously appeared on Migos‘ Culture III project and Quavo explained how important that was in a recent interview.

“I had a relationship with Pop Smoke, we had a relationship with Pop Smoke, and it was just, important. We had so many records, me and him was bout to make an album. So I just felt like I had to put Pop on there. Rest in Peace to my dawg Pop, we just made so much good music. Us on a New York drill beat is just like, magic,” he said on the Real 92.3.

Quavo was heavily featured on Pop Smoke’s posthumous debut, Shoot For The Stars, Aim For The Moon.

The trio were also asked to confirm rumors that they almost signed to Kanye West. “It was a management deal. It wasn’t no official.”

The latter is going neck-and-neck with the Atlanta group for the No. 1 album.

The post Quavo Reveals He Was Working on a Joint Project With Pop Smoke appeared first on The Source.