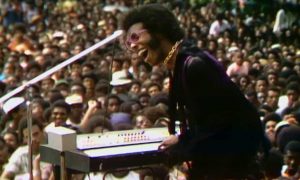 Questlove’s “Summer of Soul” was a instant hit at the 2021 Sundance Film Festival and now the documentary debut of the iconic drummer of The Roots, has a Hulu and theater release date of July 2.

The film chronicles the 1969 Harlem Cultural Festival, aka Black Woodstock, won the Grand Jury Prize and Audience Award in the Documentary section and accoridng to IndieWire was added to Searchlight Pictures.

The film has performances from B.B. King, Stevie Wonder, Mahalia Jackson and Mavis Staples, Hugh Masekela, Mongo Santamaria, Nina Simone, and Sly & the Family Stone, among many others.

You can see a trailer of the film below.

The post Questlove’s ‘Summer of Soul’ Set for July 2 Release appeared first on The Source.