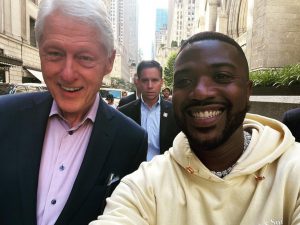 Ray J and President Bill Clinton are a pair that makes no sense at all but all of the sense at the same time. The two controversial and always entertaining figures linked up for a selfie and Ray J saw it as the perfect opportunity to market his Raycon Global line of products.

“Presidential Marketing!! #BILLCLINTON #newyorkcity He wants the red white and blue @rayconglobal earbuds!!! – I GOT YOU BILL!!,” Ray J wrote.

What songs do you think Bill Clinton would play in his Raycon earbuds?

During the pandemic, Ray J went mobile with Raycon by establishing new ground in Miami. He linked with Miami’s biggest influencers including native Rick Ross, and NBA legend Dwyane Wade.

During his conversation with Ross, the MMG CEO admired everything about the RayCon earbuds, including the jingle that plays when you turn them on.

Ray J also linked with Dwyane Wade and his dad, D. Wade Sr. for some hoops. While balling on the court, the “One Wish” singer kept his Raycon earbuds in. He credits his solid shoot percentage to the earbuds, saying it enhanced his jump shot.

You can hear Ray J talk more about that venture below.

The post Ray J is Trying to Get Bill Clinton New Headphones appeared first on The Source.