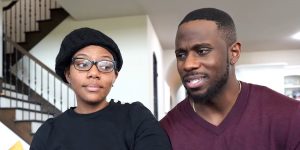 Earlier this month, a woman named Candice De Mederios told blogger Tasha K that she had an affair with Derrick Jaxn. In addition to her reveal, she also claims flew her down to Miami for a weekend getaway in July 2020.

Now, the guru is sharing his piece; in which he explains that he was at the end of his relationship with his wife.

Via a nearly 30-minute YouTube video, the best-selling author shares that he and his wife had unofficially separated around early February 2020. Before their unofficial break, Jaxn shares that he said to his wife that he couldn’t “handle this.”

“That was February 4, the exact same day Da’Naia, my wife, packed up the kids and left the crib and went 1,500 miles away to her mom’s crib.”

According to Jaxn, the two have since been unable to restore their marriage. That’s even in despite discussion and counseling.

Furthermore, Jaxn is seen admitting to his affair in a video on his Instagram today (March 23).

While sitting with his wife Da’Nai Jackson in the clip, Jaxn says;

“Derrick Jaxn was involved with other women outside the marriage. I’m talking about as serious as sex to sexual flirtation and meeting up and that kind of thing.”

Continuing on in the video, both his wife and Derrick speaks on the matter.

Additionally, the social media relationship guru’s affair is sparking debates about his reliability. What do you think about Derrick Jaxn’s affair?

The post Relationship Guru Derrick Jaxn and His Wife Speak Out About His Affair appeared first on The Source.