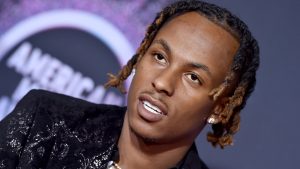 Rich The Kid is no stranger to overindulgence. His latest exercise in the trade, however, reportedly led to a minor run-in with the law when he decided to bless the streets of Rodeo Drive.

This past Thursday (April 22), the “Richard Mille Patek” rapper showed up on Rodeo in front of Burberry and Louis Vuitton, per TMZ, and poked out a Black Rolls Royce to begin tossing money into the air.

Naturally, bystanders rushed the streets to grab a piece of the pie, only encouraging the Atlanta-bred rapper to keep the antics up, even wishing a fan a happy birthday during the excitement all while his latest single blasted through the speakers.

The outlet reports that shortly after, Rich was stopped by Beverly Hills police and ticketed for littering, a violation that holds a minimum fine of $250 and a maximum of $1000. Of course, we assume that such punishment is small potatoes for a man literally throwing money away.

We’d like to think he’ll certainly have no issue in re-upping considering he just inked a new multi-million dollar deal with Rostrum Records. The news first arrived a couple of weeks ago, ahead of the “Richard Mille Patek” campaign. It follows up on the end of his previous contract with Interscope Records. This time around, Rich leveraged a career of hits to sign an exclusive licensing deal with the Benjy Grinberg-led imprint, holding on to his masters in the process.

“How he signed a deal but still independent ??? what’s next you could never expect,” Rich penned of the announcement on Instagram. “I am teaching you how to become major and keep your ownership.”

The post Rich The Kid Fined For Making It Rain On Rodeo Drive appeared first on The Source.