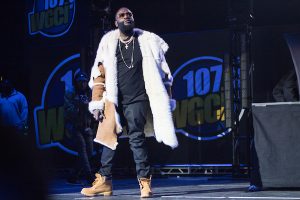 Rick Ross is fresh off the momentum of his latest track with Drake entitled, “Lemon Pepper Freestyle.” The title alone speaks to Rozay’s influence. Over the years, he has been extremely vocal about his multiple Wingstop franchise ownership. He even popularized the lemon pepper flavor. While “Lemon Pepper Freestyle” is set to land pretty high on the Hot 100 in the upcoming week, Ross is gearing up to release his 11th studio album, Richer Than I’ve Ever Been.

In doing so, The Boss teased a snippet for his latest track, in which he sampled the late legend, Issac Hayes,’ “Ike’s Mood I.” The soulful feel seamlessly accentuates Ross’ bars.

According to Chad Ochocinco, he and his “Lemon Pepper Freestyle” collaborator, Drake are working on a joint project as well. As of now, there is no release date for The Port of Miami 2 follow-up nor the joint project.

You can hear it here courtesy of Hot New Hip Hop.