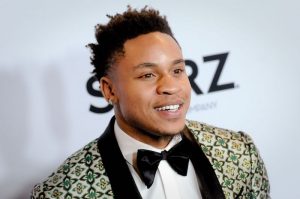 Rotimi received a 2-for-1 for being apart of the legendary Coming to America franchise. In addition to playing the role of “Idi Izzi,” the Power actor has become the latest ambassador for the Canadian whisky brand, Crown Royal. He speaks to the importance of the Barbershop and why it is a staple within the Black community. In doing so, Crown Royal and Rotimi link up “Royal Cuts.”

“I loved their message behind it,” said Rotimi. “They believe that the Black community is so important, especially in building and strengthening it. That’s what it’s all about. And also royalty, Crown Royal, Coming 2 America, Naija boy himself, it’s a perfect match.”

While on set, the “Love Riddim” crooner received praise from his star-studded castmates for his music including Arsenio Hall.

“When I first met him on set, that was the first thing he said to me,” stated Rotimi. “‘Love Riddim’ is my favorite song.’ You never know who’s watching, so that was a big moment for me.”

Following the success of his previous singles, “Love Riddim” and “In My Bed” featuring Wale, he looks to take that momentum into his next project.

The post Rotimi Teams Up With Crown Royal to Celebrate ‘Coming 2 America’ appeared first on The Source.