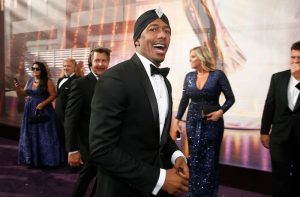 Just in March, the creator behind Wild N Out, Nick Cannon was celebrating the news of his twins with DJ Abby De La Rosa. Not too long before that in December, Cannon welcomed his second child into the world with Brittany Bell. The couple’s first child was welcomed into the world back in 2017.

This past week, model Alyssa Scott posted photos of her growing baby bump. Scott is reportedly a model for Cannon’s hit show, Wild N Out. Rumors of the baby being fathered by Nick Cannon didn’t begin until Scott captioned one of her photos “Zen S. Cannon.” One of Scott’s followers asked if the baby was with Nick Cannon, as there have always been rumors between the Wild N Out cast and Wild N Out girls.

“Is Nick Cannon the dad?” someone wrote with the thinking emoji. Scott didn’t blatantly say yes or no, however, she responded to the comment with smiling heart emojis.

While some are rooting for Cannon, others are disappointed. Check out the tweets below.

The post Rumors of Nick Cannon’s 7th Child With ‘Wild N Out’ Girl Circulate the Internet appeared first on The Source.