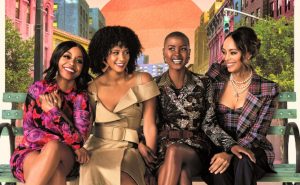 Starz, the home of the Power franchise and American Gods, has dropped a hot new, trailer for their new comedy, Run the World. And the premium cable platform announced the premiere date, which is slated for May 16.

The series creator, Leigh Davenport, also the writer of BET’s reimagining of Boomerang is behind the eight-episode, half-hour series. Davenport also serves as executive producer with showrunner Yvette Lee Bowser, who is the creator of Living Single and the woke Netflix series, Dear White People. Carrying production is Lionsgate Television.

Here’s the official logline: Run the World is the story of a group of Black women – vibrant, fiercely loyal best friends – who work, live and play in Harlem as they strive for world domination. At its core, it’s an unapologetically female show about enviable friendship and not only surviving – but thriving together.

Check out the trailer below:

The post ‘Run The World’: Starz Comedy From ‘Living Single’ Creator appeared first on The Source.