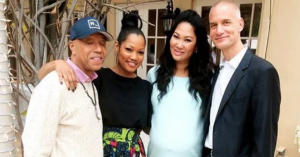 According to. report from TheBlast, Hip Hop mogul Russell Simmons is suing his ex-wife Kimora Lee Simmons and her new husband, Tim Leissner, for using Simmons’ shares of his Celsius Energy Drink company to pay for attorney fees for Leissner. The Def Jam pioneer claims that his shares are being used as collateral to pay a bond in connection with criminal charges filed against Kimora’s new hubby by federal authorities.

In the suit filed by Simmons, he claims that he. Kimora and her husband Tim invested millions of dollars into Celsius Energy Drink, but allege that the Baby Phat head honcho and her new beau “conspired with each other, aided and abetted each other and together engaged in fraud by causing an unlawful conversion and fraudulent transfer” the Celsius shares to themselves without his knowledge or consent.

Russell says that he sent a letter to his ex-wife on May 5, pleading with her to do the right thing in order to avoid a lawsuit. In the letter, he wrote, “to get the important family matter of the Celsius shares to a close so that we can put it behind us and carry on as the loving united front we have always been.”

Simmons is asking a judge for damages against Kimora and Leissner and believes he should be awarded restitution for interest and equal value for the ill-gotten shares.

Kimora’s husband plead guilty to criminal conspiracy to violate the Foreign Corrupt Practices Act and conspiracy to commit money laundering in November 2018. Simmons claims he knew Leissner would need millions of dollars, $44 million according to his lawsuit, to stay out of jail which prompted the illegal transfer of the shares.

Simmons closed his letter to his ex-wife, saying, “I am shocked and saddened to see how your side has behaved in response to my repeated attempts to get an agreement from you to rightfully and legally reaffirm my 50% of the Celsius shares..which have been locked up with the government after being used for your husband’s bail money.”