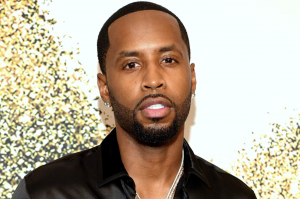 Love & Hip Hop reality star Safaree revealed he may be separating himself from the franchise in the future. In a series of tweets Wednesday night, the reality tv star shared his discontent with series, for airing footage of his 1-year-old-daughter Safire falling in Season 10. Here’s what he had to say about it.

“And y’all LHH editors ain’t shit. we told y’all not to air my baby falling and y’all still used it. Had us reshoot a whole bunch of bullshit and y’all still used that. Y’all don’t have no respect, because that was not my response of me finding out I was having a boy!” wrote Safari.

“That was tacky and tasteless!! It’s definitely about to be a wrap on my time with y’all. Y’all be wanting too much of ppl time to be doin dat type of wack shit!! We filmed a hr long convo for that scene and y’all chop it to 3 mins and use that and make it a focal point. Weak” wrote Safari.

The episode the tv star is referring to is season 10, episode for. I the episode, Erica Mena shared the gender of their upcoming baby boy to Safaree. While discussing the news, their 1-year-old daughter fell down.