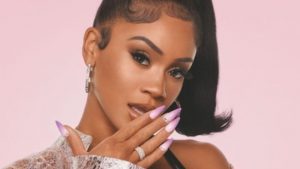 At the beginning of the month, fans thought that Saweetie and Cher were teaming up for a joint collaboration on the “My Type” rapper’s upcoming album, “Pretty B*tch Music.” While imagining that the two on the song together may seem unique, Saweetie cleared the air and let it be known that she and the Goddess of Pop are actually linking up for a campaign rather than a song.

“Me and Cher are working on a really big campaign,” Saweetie said in an interview at the 2021 BET awards.  “I can’t share too much because of contracts.”

The rapper was originally gearing up to release her album on June 25th but due to her link-up with Cher, Saweetie shares that she is delaying the release of the anticipated project.

While Saweetie is reconstructing her music, fans wonder what they can expect from her debut project.  “I’mma take y’all to the island,” Saweetie answered when asked about what can be expected. Are you ready for the new release date to Pretty B*tch Music?

The post Saweetie and Cher Team up for Campaign appeared first on The Source.