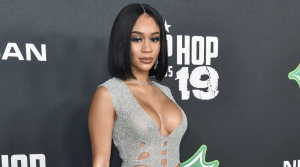 It’s been a busy year for Saweetie. The Cali rapper has been working on her upcoming album”Pretty B*tch Music”, going through artist development, securing partnerships with various beauty and fashion companies, graced the covers of major magazines and more. Just when you think the California rapper has done it all, she shows how extensive her resume is.

In a Tweet to her 1.7 million followers, the Icy girl said that she has big news to share with her fans Thursday.

“big mama got a secret to share tomorrow!!!” wrote Saweetie.

Since sharing the tweet Wednesday night, the rapper hasn’t revealed anything else. But, we’re hoping its a new release date for her PBM LP. Originally scheduled for early Summer 2021, the studio album was pushed back by the artist.

In an interview with Big Tigger last month, the rapper broke the news about the delay.

“Yes, PBM was supposed to come out this month, but I was really living with it,” Saweetie said. “And one of my goals is for people to really feel something with every song, so I had to go back and reconstruct some songs. Just know that I’m a perfectionist and it’s on the way.” said Saweetie.

The post Saweetie Has News For Fans Thursday appeared first on The Source.