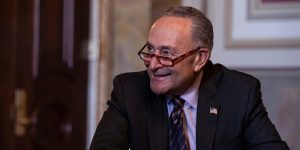 Senate Majority Leader Chuck Schumer is all in on 4/20 and it’s fitting today, he has reaffirmed his stance to legalize and decriminalize marijuana federally, by 4/20, next year! The staunch democratic senator from New York hopes to see an end to the drug’s prohibition once and for all.

“Hopefully, the next time this unofficial holiday, 4/20, rolls around, our country will have made progress in addressing the massive overcriminalization of marijuana in a meaningful and comprehensive way,” Schumer reiterated on the floor of the upper chamber.

Schumer was blunt in saying the nation’s war on drugs has “too often been a war on people, particularly people of color … I believe the time has come to end the federal prohibition on marijuana in this country, and I’m working with Sens. Booker and Wyden on legislation to do just that,” he said.

In February, Schumer and Sen. Cory Booker, D-N.J., and Ron Wyden, D-Ore., all released a joint statement that also called for restorative justice for people who have been convicted of marijuana-related offenses/crimes.  The senators said then that they will release “a unified discussion draft on comprehensive reform” earlier this year and that passing this important piece of wide-sweeping legislation will be a top priority for the Senate. The draft still has yet to be released.

But the House recently passed legislation that allows banks to work directly with cannabis companies in states where cannabis is legal.  This will pave the way as a maneuver to allow for more commercial, federal use.  This recent legislation now awaits Senate approval.  So far, 15 states and the District of Columbia have legalized cannabis for adult recreational use, and 36 states permit medical use of the drug.  Happy 420 ya’ll, seems like times are a changing!

The post Senate Leader Schumer Wants Cannabis To Be Decriminalized Federally by 4/20 Next Year appeared first on The Source.