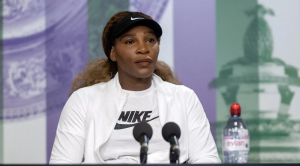 Tennis legend Serena Williams confirmed she will not be competing at the 2021 Olympic Games. She made the announcement during a pre-Wimbledon press conference.

“I’m actually not on the Olympic list — not that I’m aware of. If so, then I shouldn’t be on it,” Williams told reporters.

While the tennis star did make the announcement, she didn’t go into detail on her decision to skip the Tokyo Games.

“There’s a lot of reasons that I made my Olympic decision. I don’t feel like going into them today. Maybe another day. Sorry,” said Williams.

Throughout the years, the Olympic gold medalist has earned that title 4 times. In 2000, 2008, and 2012, Williams won three gold medals in women’s doubles, with her sister Venus. The sister-duo was upset in the first round at the 2016 games in Rio de Janeiro. Serena Williams also won gold in women’s singles in 2012, against Maria Sharapova in the final.

U.S. Tennis Association spokesman Chris Widmaier wrote in an email to The Associated Press on Sunday: “Ultimately, the decision to participate in the Games is an individual one, and as we emerge from the pandemic, we recognize and respect the personal decisions made by our top athletes regarding participation in the Tokyo Games. Although we fully support the IOC and the (International Tennis Federation) and have encouraged our athletes to participate, we recognize the fact that in this unique time, some athletes may choose not to participate for personal reasons.”

Williams isn’t the only tennis player that has made the decision to pass on competing in Tokyo. Top players like Rafael Nadal and Dominic Thiem also announced they won’t be attending. The 2020 Olympics were delayed a year by the coronavirus pandemic and are set to begin on July 23.

The post Serena Williams Confirms She Won’t Compete in 2021 Olympics appeared first on The Source.