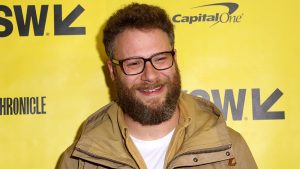 The actor admitted that was, “by far, the weirdest audition I ever did.”

Rogen claims the casting director was uncomfortable reading the dialogue off-camera to him because of how “rappery” it was. The solution was for those auditioning to bring someone with them to read the lines. “Which is fucking nuts,” Rogen said.

Seth chose his longtime friend, Jason Segel, to go with him to the audition.

“We asked our agents if our auditions could be scheduled one right after the other, so that one of us could audition for Cheddar, with the other reading the Rabbit part, and then we’d switch,” Rogen wrote.

Seth Rogen recalls his audition for 8 Mile being a disaster. “Auditioning is embarrassing in the best of times,” he reminisced. “Add the fact that one of my best friends is watching me do it, and we’re both reading for rappers from Detroit, which we could NOT have been less right for.”

The pair couldn’t hold their composure and kept laughing as soon as the audition kicked off. “I started laughing hysterically,” Rogen writes. “And so did Jason. We literally couldn’t make it through the auditions. As soon as one of us started the scene, the other would lose it.”

“Yo, yo, Rabbit!” Seth remembers saying as Cheddar. “You gotta record your shit at Paisely Park, yo!”

“Where, yo?” Segal responded, as Rabbit.

Seth and his friend felt ridiculous reading the excess African-American vernacular English and couldn’t complete the audition. “It was so silly, we just couldn’t finish,” Rogen explained. “We just excused ourselves and saw ourselves out, tears streaming down our faces.”

The post Seth Rogen Reveals That He Auditioned For ‘8 Mile’ appeared first on The Source.