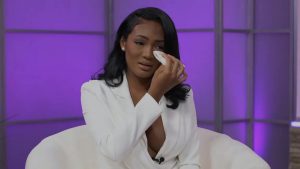 Simon Guobadia and Porsha Williams broke the Internet when they announced that they were in love and engaged to be married.

Fans expressed support for his estranged soon-to-be ex-wife, Falynn, and she’s gearing up to share her side of the story.

That clearly doesn’t sit well with Simon who described Falynn as a “cheating wife.”

“Let’s start with why I filed for divorce,” Simon wrote on Instagram alongside a preview of a sit-down interview Falynn did about her past relationship. “Let’s start with who she cheated with and currently pregnant for and living in a home I paid for – post divorce.”

Page Six reports that Simon thought “it was time to speak the truth.”

Falynn posted the same clip in question and teased her upcoming tell-all with YouTuber Adam Newell.

“Simon doesn’t get caught unless he wants to be caught,” she says in the video, adding at different points, “I meant what I said when I took my vows — it hurts, it hurts like hell” and “I love hard, I love really hard,” through tears.

“My truth,” she captioned the clip. “Catch this exclusive only on YouTube on June 10th.”

Do you plan to tune in to Falynn’s tell-all interview?

The post Simon Guobadia Accuses His Estranged Wife Falynn of Being Pregnant appeared first on The Source.