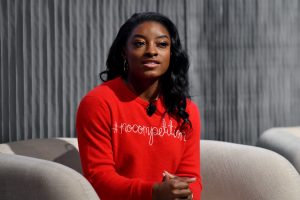 Simone Biles, the most decorated gymnast in history, made history once again.

Biles secured her seventh national title following a powerful performance on Sunday and she has a subtle message for all her haters.

– thanks for giving her a name y’all,” she shared on her Instagram, referencing her new leotard design.

In a recent interview, she explained the inspiration behind the fashion statement.

“The idea was to hit back at the haters,” she told Marie Claire. “

I didn’t feel like it was necessarily fair how they could keep saying whatever they wanted, but then if I said something, it wasn’t fair,” Biles said.

“[The haters] were joking like, “I swear, if she put a goat on her leo, blah, blah, blah.” That would make them so angry. And then I was like, ‘Oh, that’s actually a good idea. Let’s make the haters hate it, and the fans love it.’ And so that’s exactly what we did and why we did it.”

The statistics prove that Simone Biles is in fact the GOAT (Greatest of all time) of gymnastics. She has four Olympic gold medals and one bronze medal, 25 World Championship medals, including nineteen gold, and four gymnastics skills named after her.

The post Simone Biles Celebrates Milestones With Goat Embellishment on Her Leotard appeared first on The Source.