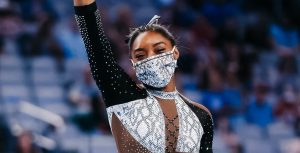 Biles is set to join Sunisa Lee, Jordan Chiles and Grace McCallum. MyKayla Skinner and Jade Carey, who are all set to compete individually.

The 2021 Olympics will go down on July 23rd in Tokyo, Japan after a delay in response to the ongoing coronavirus pandemic.

The Washington Post reported that Biles felt relieved after Sunday’s trials and “a lot more emotions going into it because of everything I’ve been through,” she said. “It’s been a long journey.”

Simone Biles will be the eldest U.S. Olympic women’s gymnasts since Annia Hatch and Mohini Bhardwaj in 2004.

This is Biles’ second Olympics but she said it also marks her last. “I’m just old; I’m always in pain,” Biles explained at the end of the night. “Something always hurts.”