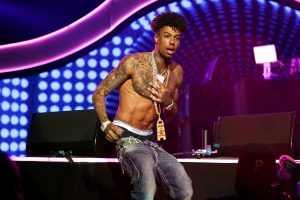 Over the weekend, a video of Blueface showing different women he calls his “girlfriends” sleeping in bunk beds and preparing to get a tattoo of him circulated had everyone talking. “You ready to get your tattoo today?,” Blueface asks one of the women, who is barely awake while lying on a bottom bunk, while another woman shows where she is going to get her tattoo of him.

This is apparently for the Thotiana rapper’s Blue Girls Club show exclusively on OnlyFans. The show uses some elements of Bad Girls Club, such as women arguing and fighting. In an interview with the Shade Room, Blueface described his intention with the show.

“I don’t have relations with any of these women. The purpose of the show is to develop these women by exercising there temper attitude patience an composure. And I’m letting then use my platform as a second chance to chase there dreams without selling themselves to get by. We are all 1 family. They all have a past I just wanna change their future.”

Even with context this seems pretty sketchy, and the internet had a lot to say about the viral clip. Check out some of the reactions below.

The post Social Media Reacts to Blueface Having His “Girlfriends” Sleep in Bunk Beds and Get Tattoos of Him appeared first on The Source.