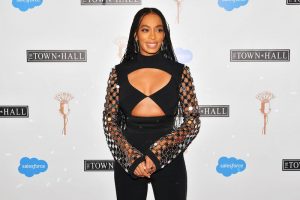 Fans are calling on Solange after this shocking video of Quavo and Saweetie went viral.

Quavo and Saweetie are back in the news cycle but this time it’s because a shocking video surfaced of the ex-couple having a physical altercation in the elevator of a North Hollywood apartment complex surfaced online.

Quavo and Saweetie are seen scuffling over an orange Call of Duty briefcase before the Migos rapper dodged a hit from the Icy Girl.

He eventually shoved her to the ground of the elevator floor and she stayed there until they arrived at their destination.

Fans immediately reacted to the video and chose their sides. Some argued that Saweetie was the aggressor, meanwhile, others urged for the cancellation of Quavo for manhandling his ex-girlfriend.

After the video of Quavo and Saweetie made its rounds, fans irresistibly referenced the infamous moment when Solange put hands and feet on JAY-Z in the elevator. “Somebody call Solange to get quavo together,” one fan tweeted.”

The post Solange Trends After Video of Quavo and Saweetie’s Physical Altercation Surfaces appeared first on The Source.