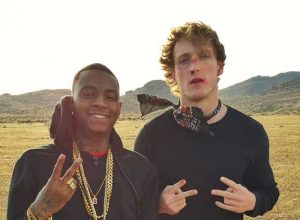 Logan Paul may be riding high after his battle with Floyd Mayweather, but he shouldn’t forget Soulja Boy made him.

Soulja, aka Big Draco, the rapper who seems to have made everything, hit Twitter with a throwback image of him and Logan Paul. The YouTube Star turned boxer wrote, “Dope shoot with @Souljaboy today.” In the retweet, Soulja wrote “The day I punched him down. I invented Logan Paul.”

Logan hasn’t addressed being created by King Soulja but he did have some words for once survived Floyd Mayweather.

“I don’t want anyone to tell me anything is impossible ever again,” Paul said. “The fact that I’m in here with one of the best boxers of all times proves the odds can be beat.”

You can see Soulja Boy’s message below.